We have always been seduced by romantic stories of old; the love letters, the poetry, the declarations of love captured throughout time in song and literature. We forget, however, that these examples embody only a fraction of past society. Those who could read and write were part of the nobility, so it is the words of the rich and well-educated over which we continue to swoon. This asks the question; how did the rest of society, the common folk, declare their love?

For many around the world, we will never know. There is little surviving documentation to give us insights into their daily lives, let alone something as frivolous as a token of love. In Wales, however, that is a different story, and one which is so well preserved that it is continued to this day.

Love is a treasured and honoured emotion worldwide, however, in Wales it is further commemorated with an additional celebration – St Valentine’s Day is not the only occasion to celebrate love as there is also St Dwynwen’s Day on the 25th January.

St Dwynwen is the Welsh patron saint of lovers and is believed to have lived in the 5th century. She was daughter to King Brychan Brycheiniog (who, according to legend had 24 sons and 24 daughters, thus probably becoming a common denominator on many people’s family trees!). Dwynwen is believed to have fallen in love with a young prince called Maelon Dafodrill, however, she was already betrothed to another. The tales vary here; some say Maelon was furious and forced himself upon her before fleeing. Dwynwen was devastated, escaping to the forest where she begged God to help her forget. As she slept, an angel appeared with a potion which cooled Maelon’s ardour so much so that he turned to ice. Cruel as Maelon was, Dwynwen couldn’t bear to see him frozen so she prayed again. God answered by offering her three wishes – first, she asked for Maelon to be thawed, second, that God met the hopes and dreams of all true lovers while mending every broken heart, and third, that she would never marry. 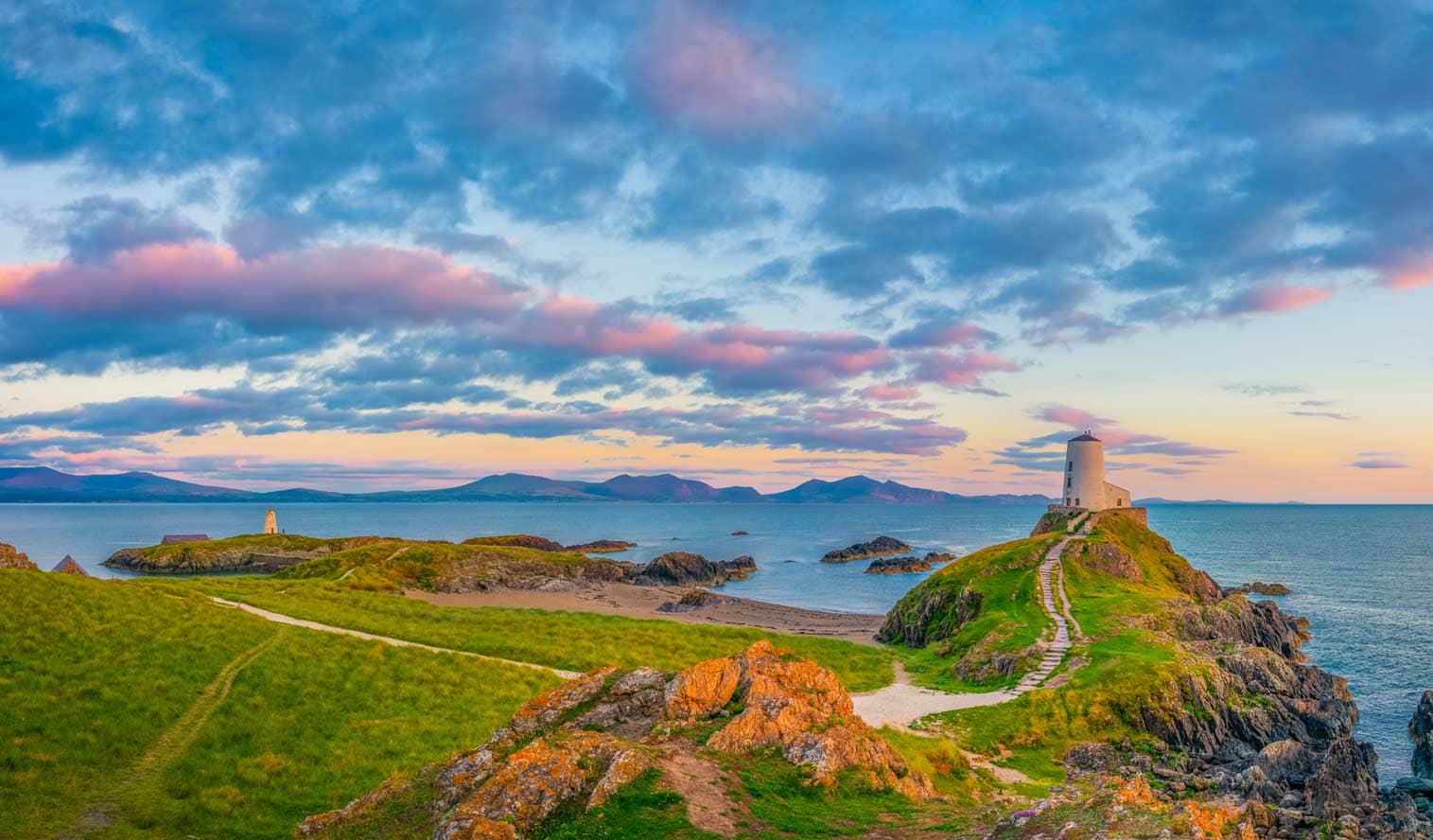 From then on, Dwynwen devoted herself to godly service, founding a convent at Llanddwyn off the west coast of Anglesey. It has been a destination for pilgrimages since her death in 465AD, especially because of the mystery of Dwynwen’s Well. According to legend, this well can predict if your relationship will be a success or failure as it contains sacred fish and eels which swim eagerly if they sense a happy relationship. Dwynwen’s sacrifice for the future lovers of Wales has been commemorated with an occasion to celebrate love, and on this date, young suitors traditionally gave their beloved a token to declare their affection – not a poem or a ballad, but a lovespoon.

In our language today, we don’t associate loving affection with spoons, yet, you’ll surprised to learn that the term ‘spooning’ originates from the Welsh lovespoons. Therefore the act of giving a spoon to your beloved lives on to this day!

A ‘lovespoon’, the token after which our berry, fruit gin is named, is a unique symbol of Welsh artistry and nationhood which goes back centuries. Wooden spoons were used on a daily basis by the common people of Wales, with the folk most likely carving their own. While precise dates and records are difficult to source, it is now part of folklore that throughout the centuries, during the winter months young arduous men would carefully carve intricate designs into wood, fashioning them into delicate and detailed pieces of art. These lovespoons would then be given to the fair lady of their affections; if she accepted, the spoon would be hung on their wall and they would ‘officially’ begin a relationship.

An artistic and thoughtful substitute for a poem, these lovespoons must have taken precision and endless hours to perfect. Unlike jewellery and gifts from many other suitors of old which flaunted status and wealth, these spoons demonstrated the young man’s dedication, care and craftsmanship, skills which would have been highly desirable in a husband. Furthermore, as spoons were necessary items for the household, the young men were epitomising the duality of a perfect partner – the artistic and passionate, along with the reliable and practical – within a simple utensil.

While we cannot be certain when the first lovespoons were crafted, the word ‘llwy’, the Welsh word for ‘spoon’ first appeared in the 6th century, approximately one hundred years after St Dwynwen’s death, in poetry by the Welsh bard, Taliesin. Amongst the myths of Taliesin’s adventures, this commonplace kitchen utensil appears to anchor the stories in reality and could mark the introduction of the spoon having more significance than just for feeding oneself. The earliest dated lovespoon still in existence is from 1667, available to see at the Welsh Folk Museum in Cardiff, which can indicate the 17th century as a time when this practice became more prolific amongst the country’s young men. Prior to this, lovespoon making was probably prevalent but the spoons would have been used or have simply broken over time.

As the custom became common place, the lovespoons became more elaborate. Each lovespoon is personal to the maker and how ardently he admired his beloved. The more intricate the design, the more he loved her due to the amount of time it would take to carve. Naturally, hearts appear on numerous lovespoons; the symbol of love signifies the man’s depth of feeling, while two hearts are likely to mean the love is reciprocated. Bells represent marriage, a chain symbolises unity and partnership, and a horseshoe brings good luck to their union (and hopefully to the carver!). Often, lovespoons will display a dragon as an indication of the token’s Welsh heritage and as a symbol of protection, and a twisted stem or knotwork which, while on one hand symbolises the couple’s togetherness, also recognises Wales’ Celtic background. For shy young spoon carvers who were reluctant to show their emotions, lovespoons were the perfect way to announce their feelings.

We have imitated the knotted, twisted pattern of a lovespoon on the labels for all of our gins; the Celtic knot wreath harks back to our Welsh heritage. As part of a series for our gins, the back of the label shows a painting in vivid blues, greens and yellows by artist Alan Rankle, illustrating the changing landscape through broad brushstrokes and wild use of colour. This depiction of nature is mirrored in the gin’s flavour.

The subtle pink colour of the gin suggests the wild fruity flavour bursting with berries. The core flavours in Lovespoon gin are red fruits – raspberry, blackcurrant and blackberry – as well as spicy juniper to add a depth of fragrance to the sweet profile. These fruits have commonly been associated with themes of love and seduction. Throughout the Middle Ages, raspberries were used in concoctions believed to bring love, influence fertility, and the red colour symbolised blood which carried emotions such as love to the heart. Sweet strawberries and rosehips are added to the berry flavour, which additionally have deep connections with romance. According to folklore, rosehips were used in love spells while strawberries, which are related to roses, are an aphrodisiac and form a perfect heart shape. The combination of these fruity, floral flavours is sweet and tangy, and gives a romantic ambiance to your gin cocktail.

The romance of this tradition goes beyond the tentative, budding relationships of old – lovespoons also represent the Welsh people’s love of their nation. Lovespoons continue to be made today, commemorating the customs of Wales in a beautifully designed souvenir which is unique to this country. Some lovespoons are as big as a metre long, showing incredibly detailed designs. The Welsh rugby team have their own giant lovespoon. The task of the youngest member of the team is to carry it around at all events, promoting the Welsh tradition of art and craft. The emblems of the nation are represented through dragons and daffodils, and once again the lovespoon symbolises one’s love – however this time it is a love of Wales. While the rich could write sonnets or buy jewellery, there were few exceptions which could differentiate one from another. Meanwhile, little did those young men of the poor Welsh communities know that their craftmanship would represent Wales today.

If you’d like to buy a lovespoon contact Dia who offers a unique range of traditional hand carved Welsh lovespoons at The Lovespoon Workshop. All of their lovespoons are handmade from wood from sustainable sources; what’s not to like about a sustainable Welsh eco business!